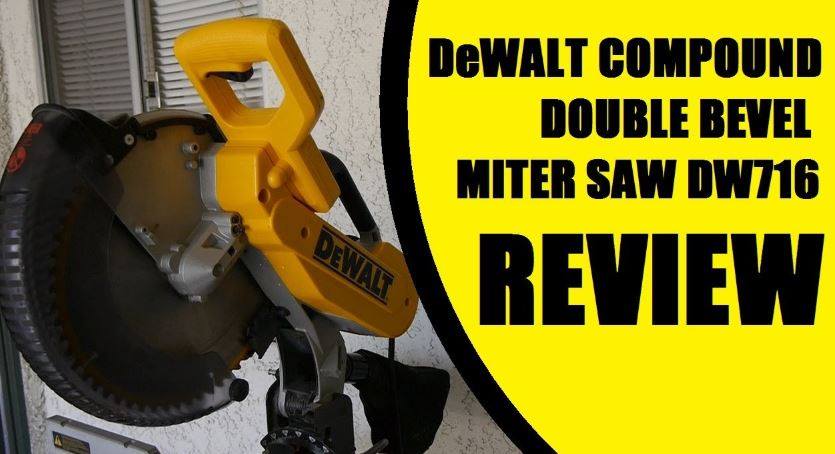 With a DEWALT DW716, you can easily cut through baseboards or molding. The reason why is because the DEWALT DW716 comes equipped with a powerful 15-AMP engine. It also has controls that are easily adjustable. Finally, it comes with a top notch blade, a wrench, and even a dusting bag.

The DEWALT DW716 Compound Miter Saw comes with a twelve-inch blade, a size that is more than enough for powerful cutting. And with its RPM of 3,600, the machine is able to cut at a relatively fast pace. This makes it an excellent choice for positions involving crosscutting or miter-cutting.

The DEWALT DW716 Compound Miter Saw will also deliver a more precise cut for each of your projects. Again, this is very important when it comes to miter cutting. If the nature of your work requires you to adjust the blade, you can do so with no problems, (as the DEWALT DW716 comes with 11 different stops). The machine also has an adjustable handle, which comes in handy when you are trying to cut at a certain angle. Also note that the machine has a miter capacity that ranges from zero to fifty degrees. It can go left or right with these angles.

As far as the machine’s fence, it can support 6 and 5/8th inches when used vertically on crown molding. If it is used on base molding, it can hold a setting of 6 and ½ inches. And for both situations, the fence easily slides out, in the event you want to create bevel cuts.

More on the DEWALT’s Bevel Capacity

When it comes to bevel cutting, Dewalt DW716 Compound Miter Saw will deliver the most accurate cuts imaginable. This is all thanks to its setup, as you can adjust the machine 0 to 48 degrees left & right. In turn, you have the ability to complete bigger, more complex jobs. And during each adjustment, you will be flipping your saw instead of your wood, a characteristic that makes your cutting even smoother

In terms of dimensions, the DEWALT DW716 can create cuts that are two by eight inches in length. On a cross cut setting at a 90-degree angle, it will cut two by tens.

The DEWALT DW716 Compound Miter Saw is extremely lightweight. Weighing only forty four pounds, you will have no problems moving it across the thickest cuts of wood.

The DEWALT DW716 also comes with a miter saw that is adjustable. And after it is adjusted, you can use the system’s laser to create a clearer cutting path. Note that you will need to buy a LED indicator to have access to this feature.

Now, if the device does happen to break, you will be protected under its generous warranty. This warranty lasts for one year, and it will give you all your money back if the DEWALT doesn’t live up to your expectations.

If you need more convincing that the DEWALT DW716 is the best saw out there, listen to my opinion. I have used many saws in the course of my woodwork, but none of them could compare to the DEWALT’s power.

What current owners have to say about Dewalt DW716 Compound Miter Saw?

When I first used the DEWALT, I was really surprised at how fierce it was with its cutting ability. It proved my original theory: that the DEWALT’s unique construction would offer smooth cuts quickly and efficiently. There is also the issue of safety. Even though the machine is fast, it does not impose any extra risks for those that know how to use this type of equipment. The keyword here is extra, as you should be cautious with any woodworking machine.

Anyway, I am very happy with the DEWALT DW716.

With that said, I am interested staying current with DEWALT’s machinery. In fact, the main reason I bought the DW716 was to avoid upgrading an existing machine. I figured I would do better starting from scratch, as the DW716 comes with the laser. And after I got it, I was pretty pleased with its performance, though the setup was somewhat tedious. The instructions were not clear, but if you are used to this type of equipment you will be able to figure it out.

In any case, if you do not want to believe me, just check out some of the other reviews available. Of the ones I have seen most authors have not found any problems with the DEWALT DW716. This is rare in blogosphere, as many feel obligated to showcase at least one negative element of the product they are reviewing. Bloggers could not do that with the dewalt leaf blowers simply because there are no negatives.